Our nation's coastal regions have long realized they can accomplish more by working together to solve and plan for ocean and coastal issues. These partnerships range from regional planning bodies engaged in ocean planning under the U.S. National Ocean Policy (NOP) to state-based regional ocean partnerships. This section explores how regions are working together, beginning with the five regions that have stood up regional ocean and coastal planning bodies. 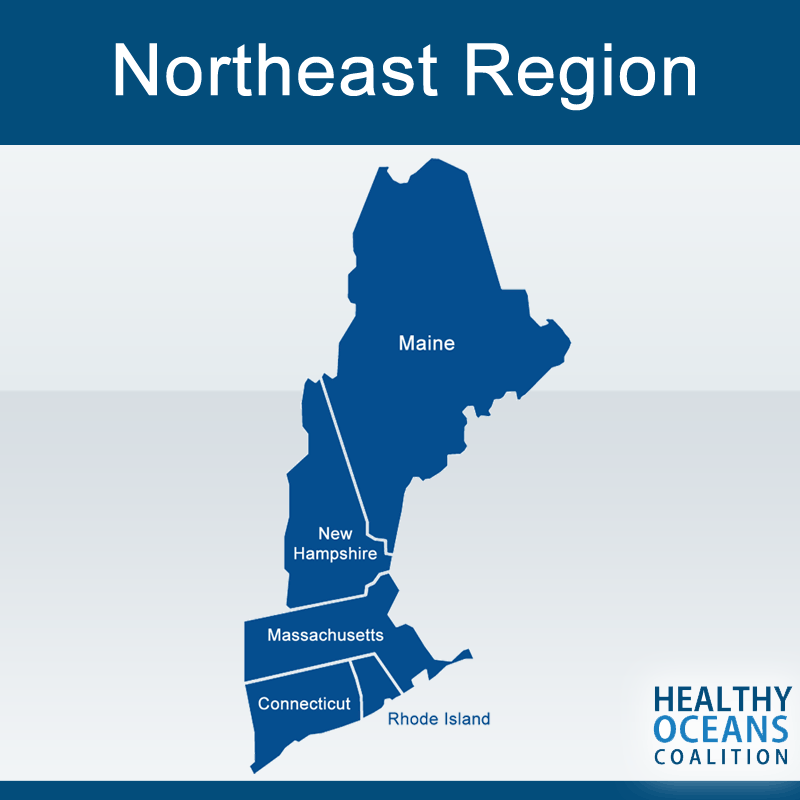 The Northeast region has long been the nation’s leader in regional ocean planning. In 2005, the Northeast Regional Ocean Council formed to serve as a forum for the development of goals and priorities and address regional coastal and ocean management challenges with creative solutions. In 2008 and 2011, Massachusetts and Rhode Island, respectively, became the first states to develop comprehensive ocean use management plans.

The nation’s first Regional Planning Body (RPB) was established in late 2012. RPBs were specific collaborative bodies envisioned by the NOP to bring state, federal, tribal, and local governments together with ocean users and scientists to plan, in a comprehensive manner, for the changing conditions and uses of our oceans.

The Northeast RPB held its inaugural meeting in November of 2012. Fast forward four years to the adoption of the Northeast Regional Planning Body's Northeast Ocean Plan - it was the first such plan in the nation. While there is still a wealth of resources to be found at the Northeast RPB’s website, with the repeal of the National Ocean Policy, the Northeast region has had to reconsider its plans for moving forward with ocean planning.

Since the NOP's replacement, the Northeast region has worked through NROC to consider its next steps. NROC’s Ocean Planning Committee, which was established before both Obama and Trump Administration ocean policies, shares many members in common with the former RPB, and continues to coordinate issues related to ocean planning in New England, as well as with the federal Ocean Policy Committee.

The Northeast still considers the Northeast Ocean Plan to be an important documentation of regional ocean management priorities and activities. 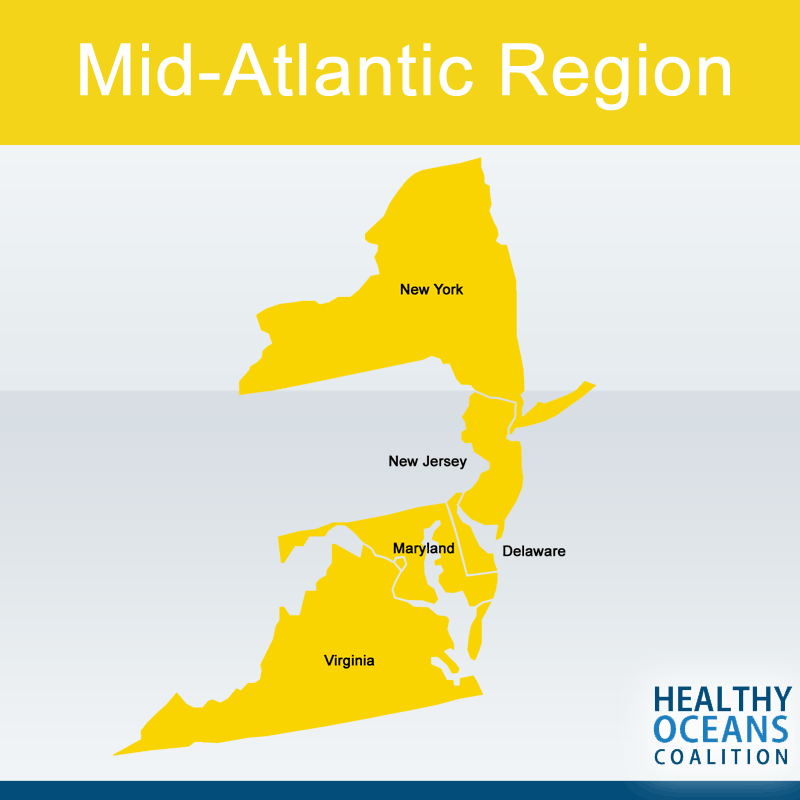 In 2009, the Governors of New York, New Jersey, Delaware, Maryland and Virginia signed the Mid-Atlantic Governors’ Agreement on Ocean Conservation, creating the Mid-Atlantic Region Council on the Ocean (MARCO). MARCO works in a comprehensive, regional approach to better maintain and improve the health of the Mid-Atlantic ocean and coastal resources and ensure that they continue to contribute to the high quality of life and economic vitality of the region’s communities well into the future. MARCO has developed its work plan, and an interactive Mid-Atlantic Data Portal to provide the region resources for ocean planning.

You can find more about the existing Plan and its implementation through 2018 at the Mid-Atlantic Regional Planning Body's website hosted by the Bureau of Ocean Energy Management (BOEM). 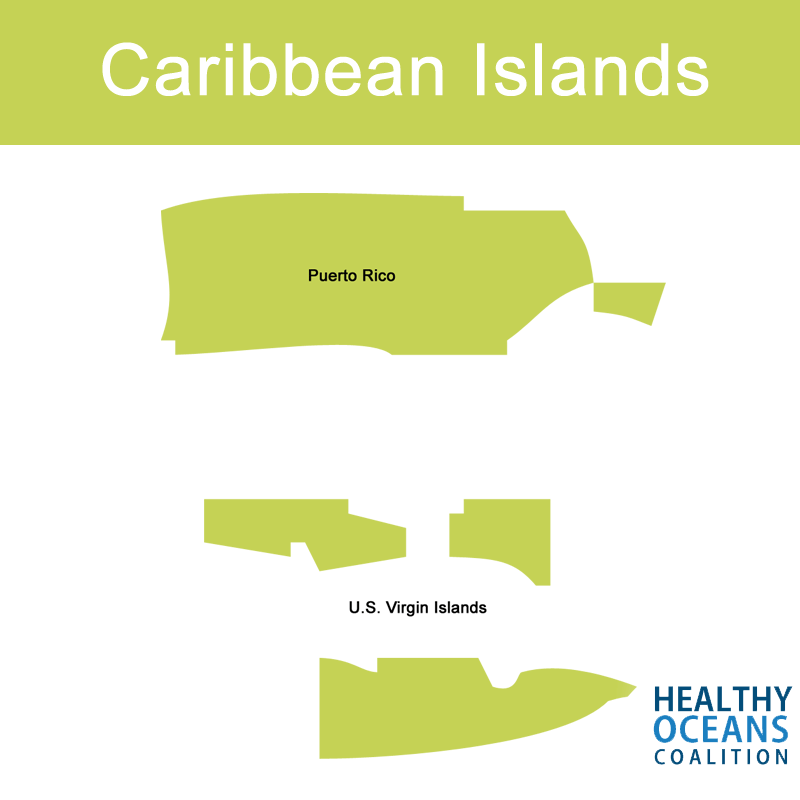 On May 16, 2012, the Governors of the Territory of the U.S. Virgin Islands and the Commonwealth of Puerto Rico established the Caribbean Regional Ocean Partnership (CROP). The CROP will:

The Caribbean Regional Planning Body (CRPB), established in 2013, works with stakeholders, scientific, business, technical experts, and members of the public to develop and implement a regional plan for the balanced, sustainable management of the coastal and marine areas of the U.S. Caribbean region. The CRPB includes federal, state and territory government representatives and a Caribbean Fishery Management Council representative as members and has a secretariat function to fulfill the responsibilities of the RPB. However, this CRPB is not a regulatory or management body and has no independent authority to direct government or private entities. Participation on the CRPB does not commit any non-federal government represented by the member to adopt its plan.

The Caribbean has also developed a Marine Planner, a data visualization tool. With the Portal, the CROP will enhance transparency and accountability of decision-makers while evaluating the best way to balance marine uses, such as providing access for recreation, conservation, fishing, renewable energy facilities and electrical grids.

It is unclear, in the wake of the NOP's repeal, how the Caribbean RPB or the CROP will modify its work to comply with the new executive order. 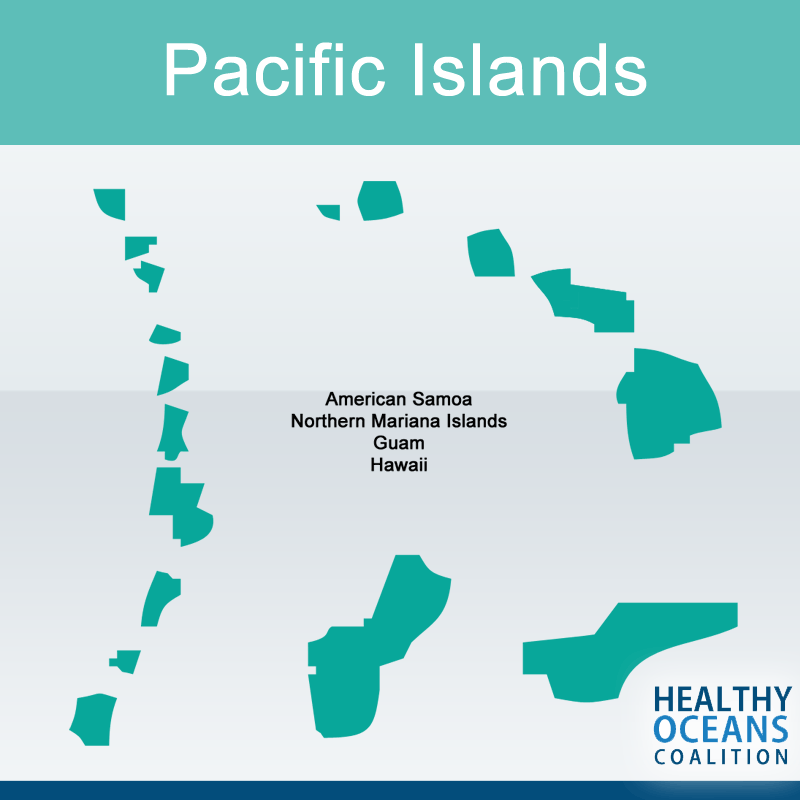 The Pacific Islands Regional Ocean Partnership (PROP) was established by the jurisdictions of American Samoa, Guam, Commonwealth of the Northern Mariana Islands, and State of Hawaii in 2012 to identify coastal and ocean management priorities that require a coordinated regional response and increased collaboration to effectively address these issues. The PROP plans to create an action plan that will expand on the PROP’s several objectives, including those that promote regional sustainability of resources, facilitate preservation of the historical, cultural, and social heritage of each state and the region, and identify opportunities for collaborative work in the ocean and coastal environment.

The Pacific Islands Regional Planning Body (Pacific Islands RPB) was established in April of 2013. The Pacific Islands RPB has moved swiftly in developing its Charter and a first-ever stakeholder engagement plan. Over the course of the first two years of operation, the RPB recognized the need for sub-team ocean planning. The RPB chose American Samoa as a starting place.

In the fall of 2018, the American Samoa became the first RPB sub-team to draft and then finalize an ocean plan. The American Samoan government are stewards of this Plan, given the Pacific Islands RPB's disbandment in June 2018. The final Plan can be found. 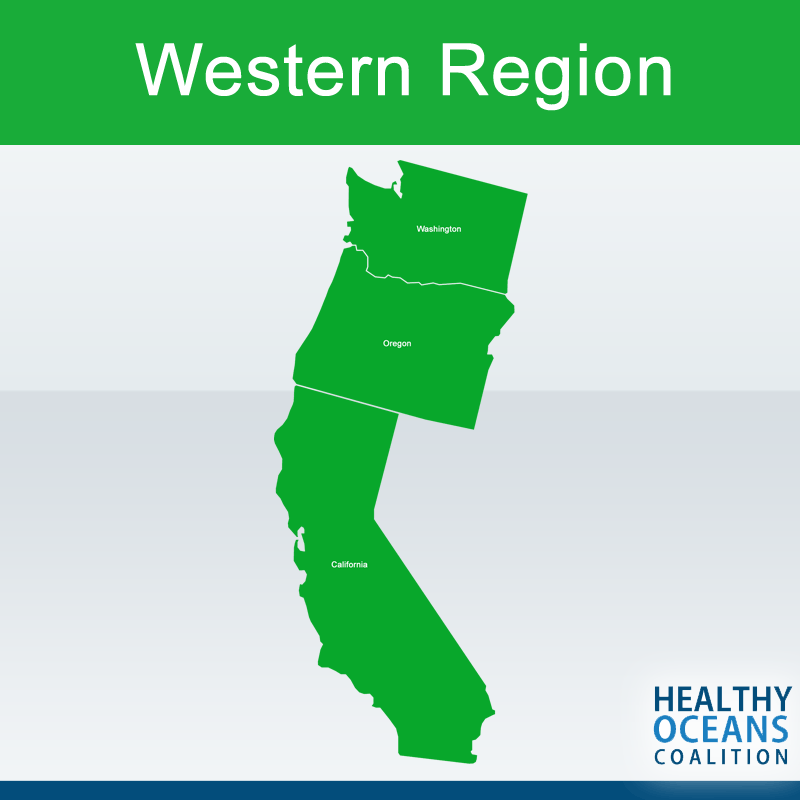 Established in 2015, the West Coast Regional Planning Body (RPB) is a partnership between federally-recognized tribes, federal government agencies, and the states of Washington, Oregon, and California focused on enhanced coordination and communication around planning and management of current and emerging ocean uses, as well as information and data-sharing on the West Coast of the U.S.

The membership of the West Coast RPB includes U.S. federal agencies, the three West Coast states of Washington, Oregon and California, and federally-recognized tribal governments in the region.

The RPB functions as a regional forum for coordination and communication between government co-managers and stakeholders on the West Coast to help plan for our ocean. Unlike the Northeast and Mid-Atlantic RPBs, the West Coast RPB has chosen to engage in marine planning through a sub-regional approach -- given the size of the West Coast planning region.

The West Coast RPB developed its charter and an assessment of stakeholder engagement and communications.

The West Coast also has an Ocean Data Network that seeks to increase the discovery and connectivity of ocean and coastal data and people to better inform regional resource management, policy development, and ocean planning.

While the South Atlantic, Great Lakes, Gulf of Mexico, and the Alaska/Arctic regions did not choose to stand up regional planning bodies, most of these regions have regional ocean partnerships going back several years. 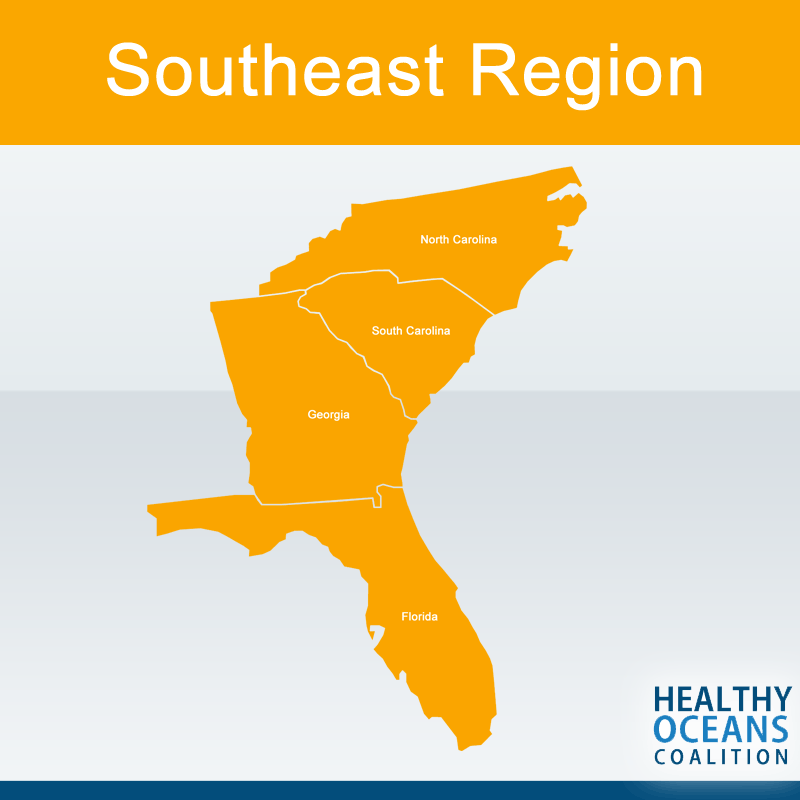 The Governors’ South Atlantic Alliance (GSAA) was created in 2009 by the Governors of North Carolina, South Carolina, Georgia, and Florida to create a regionally coordinated effort to sustain the environmental, natural resource, economic, public safety, social and national defense missions of the respective states and South Atlantic region. The GSAA is led by the four states and three federal agencies — the National Oceanic and Atmospheric Administration, the U.S. Environmental Protection Agency, and the U.S. Geological Survey.

The Southeast region has decided not to set up a separate RPB, but does focus on similar issues to ocean planning: clean coastal and ocean waters, working waterfronts, healthy ecosystems, and disaster-resilient communities.

The Southeast region also has an Ocean Data Portal similar to the Northeast and Mid-Atlantic regions. 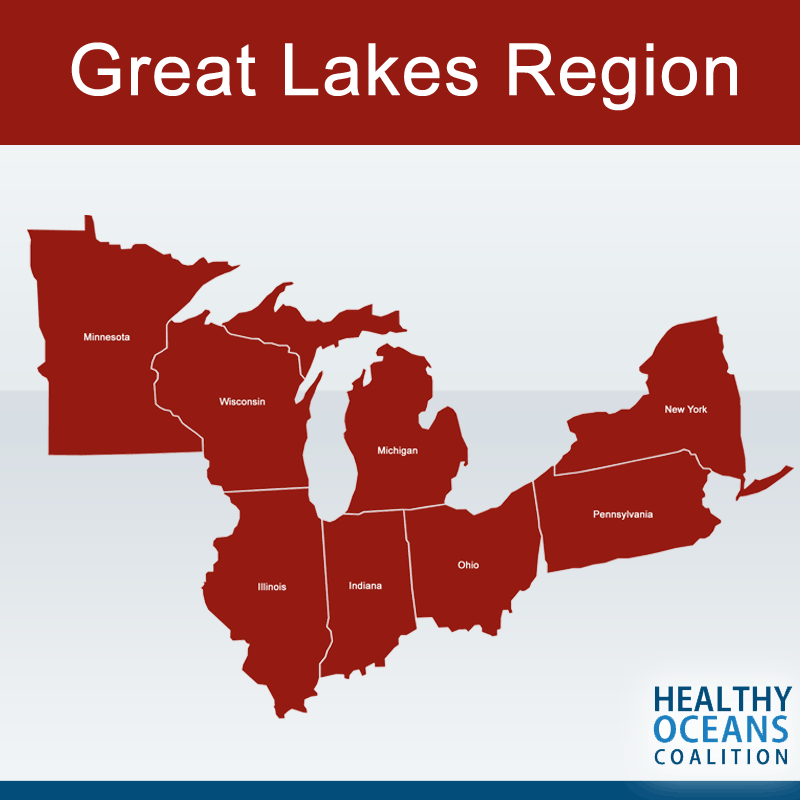 In 2005, the GLRC released its Strategy to Restore and Protect the Great Lakes. From the Strategy came the Great Lakes Restoration Initiative (GLRI), which now actively works to operationalize the GLRC Strategy. The Initiative has created two action plans, most recently in 2014 to take the Initiative's work forward five years into 2019. The Great Lakes region also chose not to stand up a separate regional planning body. 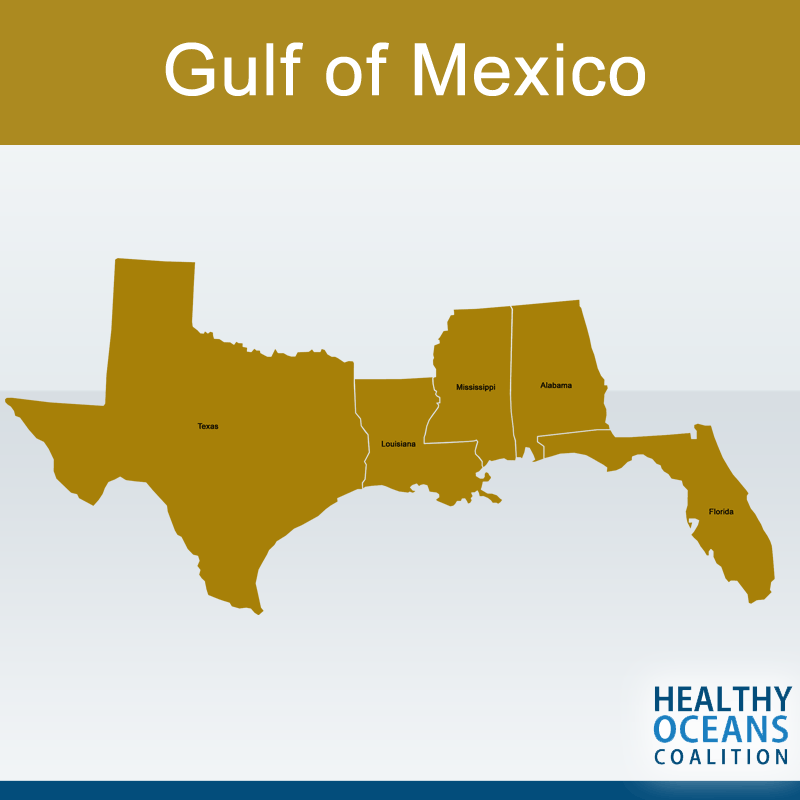 The Gulf of Mexico Alliance (GOMA) is a partnership created in 2004 by the states of Alabama, Florida, Louisiana, Mississippi, and Texas. The Gulf of Mexico Alliance is a Regional Ocean Partnership working to sustain the resources of the Gulf of Mexico. Led by the five Gulf States, the broad partner network includes federal agencies, academic organizations, businesses, and other non-profits in the region. GOMA has 13 federal agency partners, with leadership from the U.S. Environmental Protection Agency, National Oceanic and Atmospheric Administration, and Department of Interior. GOMA's goal is to "significantly increase regional collaboration to enhance the environmental and economic health of the Gulf of Mexico" The Alliance has six regionally significant priority issues it feels can be better addressed through increased collaboration at the local, state, and federal levels. GOMA decided not to stand up a separate regional planning body given its long-standing work as a regional ocean partnership, though it did engage as the NOP was being implemented around ocean planning.

In addition, the Gulf Coast Ecosystem Restoration Council, created through the RESTORE Act, implements a coordinated region-wide restoration effort to restore, protect, and revitalize the Gulf Coast region following the 2010 Deepwater Horizon blowout and resulting oil spill. It is comprised of governors from the five Gulf States, the Secretaries from the U.S. Departments of the Interior, Commerce, Agriculture, and Homeland Security as well as the Secretary of the Army and the Administrator of the U.S. Environmental Protection Agency. In 2016, the Council updated its initial comprehensive plan. Learn more about the update to the Comprehensive Plan. 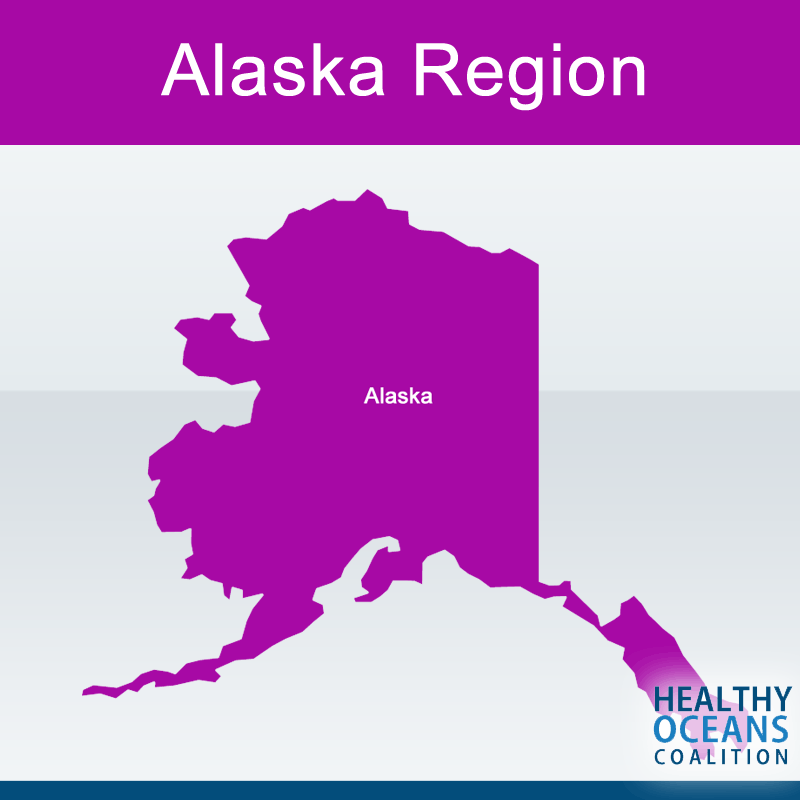 Alaska and the U.S. region of the Arctic, has not explicitly taken up integrated coastal management through ocean planning. However, the federal government has looked at ecosystem-based management through the lens of fisheries and climate change.

The U.S. Arctic adopted an ecosystem-based fishery management plan in 2009, called the Fishery Management Plan for Fish Resources of the Arctic Management Area. This plan recognizes: "different and changing ecological conditions of the Arctic, including warming trends in ocean temperatures, the loss of seasonal ice cover, and the potential long term effects from these changes on the Arctic marine ecosystem." The Plan recognizes the changing Arctic conditions could lead to unregulated fishing that adversely impacts on the ecosystem, indigenous peoples, and the marine resources found within those waters. To protect the ecosystem and its people, the Plan prohibits commercial fishing in all "Federal waters of the U.S. Arctic ... for any species of finfish, mollusks, crustaceans, and all other forms of marine animal and plant life..."