Haaland Sets National Goal of Conserving 30% of U.S. Lands and Ocean by 2030

Posted on February 7, 2020 by The Office of Congresswoman Deb Haaland 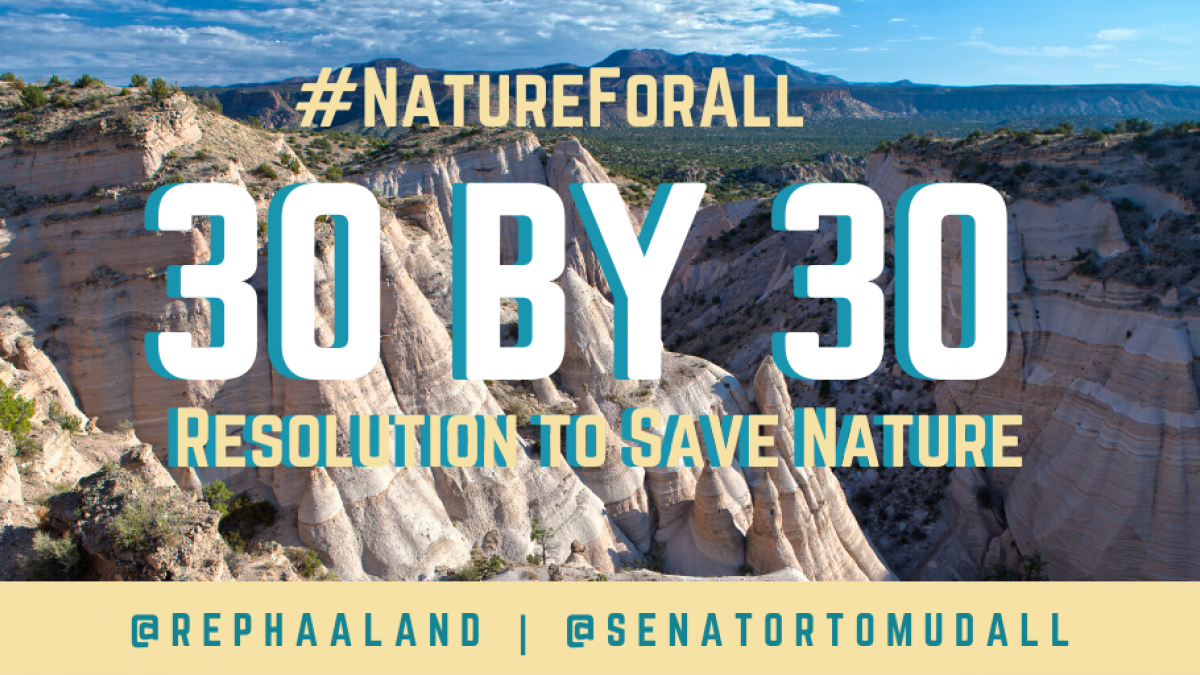 Washington, D.C. —Today, U.S. Representative Deb Haaland (NM-01) led a diverse coalition of members including Reps. Joe Neguse (Colo.-02), Ted Lieu (Calif.-33), Ruben Gallego (Ariz.-07), and Ed Case (Hawaii-01) to introduce the Thirty by Thirty Resolution to Save Nature to seta goal for the United States to conserve at least 30% of the ocean and land by 2030, which scientists say is the minimum step needed to pull us back from the tipping point that nature and our climate have reached. Each of the House co-sponsors is a member of a caucus advocating for underrepresented communities, highlighting the fact that those communities are at the forefront of the climate crisis.

“Our communities deserve fresh air to breathe, clean water to drink, and a livable planet, but right now inaction on climate change is putting everything at risk, particularly in communities of color,” said Rep. Haaland, Vice Chair of the House Natural Resources Committee. “Globally, the loss of nature – accelerated by climate change – is putting up to one million species on the path to extinction. Conserving our lands and waters is essential to protecting humans and wildlife and stabilizing our climate, so I’m following the direction from leading scientists and introducing this resolution to set a national goal of conserving 30 percent of America’s land and oceans by 2030 to tackle this urgent crisis.”

This resolution, a companion to S. Res. 372 introduced by Senators Tom Udall (D-N.M.) and Michael Bennett (D-Colo.), details the extinction, climate, and biodiversity crisis that our world is facing and follows the suggestion of a growing number of scientists that we must increase the amount of land and ocean protected around the world.

“Globally, one million species are at risk of extinction – many within decades — as a result of interconnected factors involving habitat destruction and climate change. These species and our ecosystems are not only inherently valuable, they are also necessary to sustain humanity’s own economic success and survival,” said Udall, ranking member of the Senate Appropriations Subcommittee on the Interior, Environment and Related Agencies. “That’s why I introduced the Thirty By Thirty Resolution to Save Nature in the Senate, and I am so excited to see Congresswoman Haaland lead this resolution in the House. We must write a new playbook for conserving the environment to protect nature, fight climate change, champion diversity and include all communities, including Native Americans. Our national history of protecting the natural world has shown us that conservation leads to healthy communities and economic success, as evidenced by the vibrant outdoor recreation economy in New Mexico.”

“Conservation of our public lands and oceans is inextricably linked to climate action,” said Congressman Joe Neguse. “A commitment to conserve 30 percent of America’s lands and oceans by 2030 is absolutely essential and as many scientists suggest is a minimum step that must be taken to pull us back from the tipping point that nature and our climate have reached. I’m honored to join my colleagues in the House and Senators Udall and Bennet in the Senate to champion this essential resolution. Climate change is the existential threat of our time, one that cannot be ignored or idled on, but one that must be met with bold pragmatic solutions that protect our future and our planet.”

“I am grateful to join with Representative Haaland as we strive to embrace the forward-thinking and inclusive policies embodied in the Thirty by Thirty resolution. Conservation offers the United States a brilliant opportunity to fight the climate crisis, stabilize ecosystems and save wildlife—it’s an opportunity that we must seize immediately,” said Rep. Ted Lieu.

“America’s unique lands and waters are our most powerful tools in the fight against climate change. We must be bold in the preservation of these natural resources, which sequester millions of tons of carbon each year and support thriving and healthy ecosystems that are critical to long-term climate health,” said Rep. Gallego. “That’s why I am proud to support this resolution to preserve 30 percent of U.S. lands and oceans by 2030 to ensure a safe and prosperous climate for future generations.”

A full list of supporting organizations can be found HERE.

This press release originally appeared on Congresswoman Haaland's website and can be viewed here.