California storms to get a rating from 1 to 5, like hurricanes 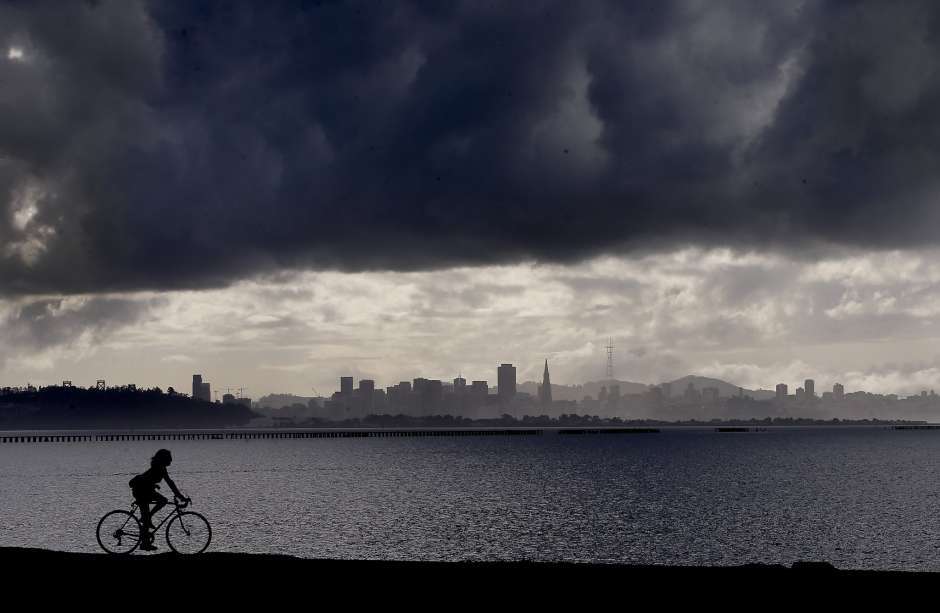 A bicyclist sees a break between storms near Cesar Chavez Park in Berkeley in 2014. Weather forecasters will soon use a scale to measure the strength of such incoming storms.Photo: Michael Macor/The Chronicle 2014

Pacific storms that bear down on the West Coast are about to get the same deference as hurricanes in the Atlantic and tornadoes in the Midwest: a rating system to attest to their strength.

A group of nationwide weather experts rolled out a scale Tuesday that will rank the giant wet fronts common in California, known as atmospheric rivers, in degrees of force from 1 to 5. The ratings are meant to give communities a more precise sense of what’s ahead. 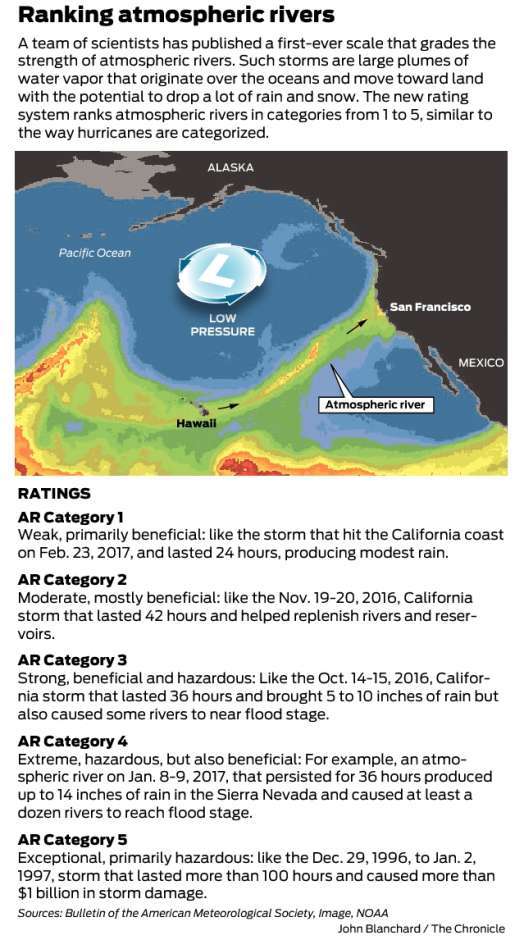 Like a monster hurricane, a Category 5 atmospheric river is something to watch out for, a days-long deluge like what threatened to topple Oroville Dam two years ago. Such drenchers can bring as much rain as the strongest of Atlantic storms and cause life-threatening floods, mudslides, downed trees and power outages. A Category 1 atmospheric river, by contrast, means modest rainfall.

The categories are necessary to cut through the hype that has surrounded atmospheric rivers in recent years, say the team of state, federal and university scientists behind the ratings. These long plumes of moisture that move with the jet stream, while a relatively new concept for California households, already have a larger-than-life reputation. After dozens blew through during the winter of 2016-17, the most in decades, many people associated them with disaster.

Wet weather in 2017 not only washed out Oroville Dam’s spillways, prompting 180,000 people to evacuate, but also flooded hundreds of homes in San Jose when Coyote Creek overflowed, while burying parts of the Sierra in more than 500 inches of snow.

“I think this scale will help academics, forecasters and water managers, but my ultimate hope is that it will help the public,” said Jon Rutz, meteorologist with the National Weather Service and one of the creators of the new ratings. “We as scientists haven’t always done a great job of communicating that there’s a difference between weaker and stronger atmospheric rivers. Not all of these events are something we need to blast a frightful headline about.”

Atmospheric rivers differ from ordinary rain in that they form as distinct masses of water vapor over the ocean that blow quickly to shore, with the potential for a lot of precipitation. Though some cause damage, others are mild and even beneficial. The atmospheric rivers in 2017 helped end California’s five-year drought.

With the science of atmospheric rivers having improved over prior decades, when the systems were simply seen as regular rainclouds, Rutz and other researchers figured it was time to introduce a standard for better characterizing the storms.

The new ratings also come as atmospheric rivers are believed to be getting more common, at least the big ones. The federal government’s Fourth National Climate Assessment released last year warned of increasing frequency and severity of such events amid a warming climate.

Details of the atmospheric river scale are published in the journal Bulletin of the American Meteorological Society. The developers come from leading forecasting and research centers in the West, including the California Department of Water Resources, U.S. Geological Survey and Army Corps of Engineers. They expect the rating system to be gradually embraced by their peers.

“My hope is that over time a wide array of people will be using it,” Rutz said.

The scale ranks atmospheric rivers based on the amount of water vapor they carry and their duration. The new ratings also reflect whether the weather systems will be constructive, meaning they will help increase water supplies in rivers and reservoirs without causing damage, or be outright violent.

“Most atmospheric rivers are beneficial,” said Marty Ralph, director of the Center for Western Weather and Water Extremes at UC San Diego’s Scripps Institution of Oceanography, who came up with the idea of rating the storms. Ralph said he did so with the hope of clarifying that such events aren’t as bad as they’re cracked up to be. “It’s been like crying wolf too often,” he said.

A Category 1 storm is defined as an event that lasts at least 24 hours, produces limited rain and creates no major problems. A Category 5 storm is described as primarily hazardous. The system that moved across California over the past week hasn’t been officially categorized but was tentatively assigned a rating of 4. The biggest impact has been in Central and Southern California.

The storms are typically noticed by forecasters about a week before they make landfall. The developers of the rating system say the atmospheric rivers can be assigned a category with “medium confidence” four to six days out. Within 48 hours of hitting the coast, they can be categorized with “high confidence.”

Atmospheric rivers develop over many parts of the world, but they’re particularly significant in the Western U.S. The Pacific Ocean, especially tropical regions, can stir up a lot of water vapor in the atmosphere that is easily knocked from the sky in the form of rain or snow when it strikes the rugged hills and mountains of California, Oregon and Washington.

In California, as much as half of the state’s precipitation comes from atmospheric rivers — and over a matter of just weeks. Their presence marks the difference between a drought and no drought.

Mike Anderson, state climatologist for the Department of Water Resources and a contributor to the new rating system, said the numbers will help water managers know when to expect to build up their water reserves, as opposed to bracing for flooding.

“As forecasts increase their value to water management in the coming years,” he said, “the AR scale provides a sense of situational awareness.”