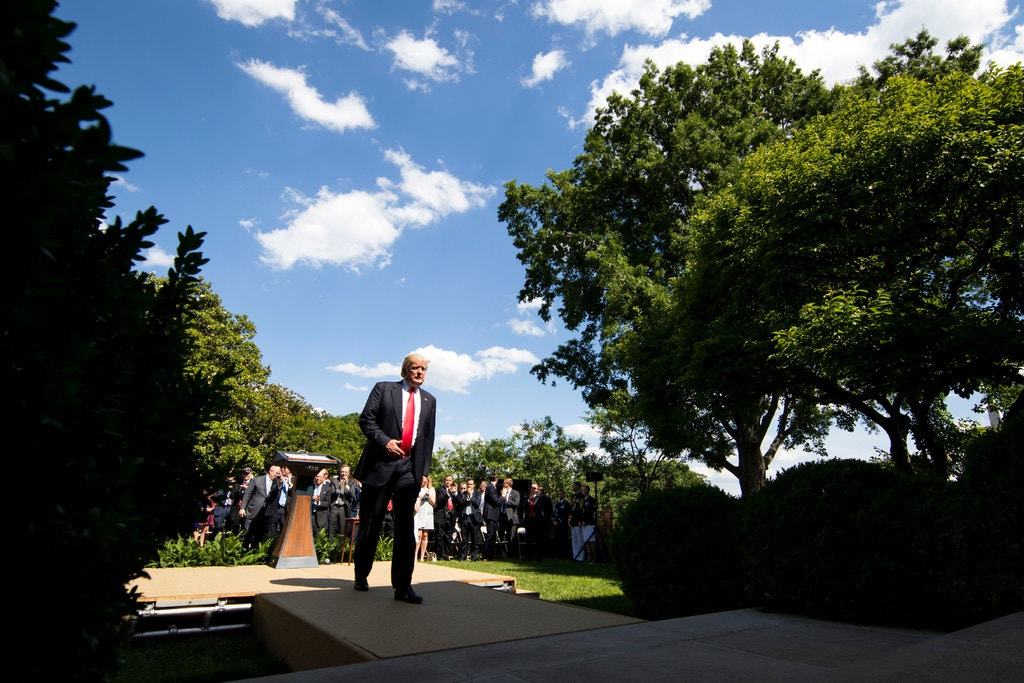 President Trump at the White House on June 1, 2017, after announcing his intention to abandon the Paris Agreement. Credit: Doug Mills/The New York Times

WASHINGTON — The Trump administration formally notified the United Nations on Monday that it would withdraw the United States from the Paris Agreement on climate change, leaving global climate diplomats to plot a way forward without the cooperation of the world’s largest economy.

The action, which came on the first day possible under the accord’s complex rules on withdrawal, begins a yearlong countdown to the United States exit and a concerted effort to preserve the Paris Agreement, under which nearly 200 nations have pledged to cut greenhouse emissions and to help poor countries cope with the worst effects of an already warming planet.

Secretary of State Mike Pompeo announced the notification on Twitter and issued a statement saying the accord would impose intolerable burdens on the American economy.

“The U.S. approach incorporates the reality of the global energy mix and uses all energy sources and technologies cleanly and efficiently, including fossils fuels, nuclear energy, and renewable energy,” Mr. Pompeo said.

Though American participation in the Paris Agreement will ultimately be determined by the outcome of the 2020 election, supporters of the pact say they have to plan for a future without American cooperation. And diplomats fear that Mr. Trump, who has mocked climate science as a hoax, will begin actively working against global efforts to move away from planet-warming fossil fuels, like coal, oil and natural gas.

Keeping up the pressure for the kinds of economic change necessary to stave off the worse effects of planetary warming will be much harder without the world’s superpower.

“Yes, there are conversations. It would be crazy not to have them,” Laurence Tubiana, who served as France’s climate change ambassador during the Paris negotiations, said in New York recently, adding, “We are preparing for Plan B.”

Negotiators spent the early months of the Trump presidency debating strategies for salvaging American support for the accord. Mr. Trump proved immovable.

President Trump had long held that the accord would cripple growth and intrude on American sovereignty. “It is time to put Youngstown, Ohio; Detroit, Mich.; and Pittsburgh, Pa., along with many, many other locations within our great country, before Paris, France,” he said in 2017 when he announced that the United States would withdraw from the accord.

Around the world, a shift in diplomatic strategy has already begun. Making the accord work without the United States will require other major polluters like China and India to step up. China, now the largest emitter of planet-warming pollutants, has made significant promises but Beijing’s ability to deliver is still in question.

Under United Nations rules, China and India are considered developing countries and are not obligated to curb emissions. They agreed to do so as part of the Paris Agreement in large part because the United States was taking action. With the United States out, other industrialized nations will have to press those emerging powers.

The European Union held high-level meetings last year in Beijing to confirm the Paris commitment of both the European bloc and China. It also has provided millions of dollars to aid Chinese emissions-control efforts and worked with Canada and other countries to coordinate standards for trillions of dollars of private and public financial investment in clean energy technologies.

But so far China has resisted pledging to speed up its initial emissions-control targets, which foresee greenhouse gas emissions rising until 2030. Europe, which is divided itself over how far to scale back coal power, may not have the clout to win new concessions.

“The E.U. is the front line out here. That’s very obvious,” the president of Finland, Sauli Niinisto, said in a recent interview. “The question is, will others listen to Europe?”

“The fact is that we may find the first conflict could come with the United States, and I think that should not be something desirable for anyone,” said Teresa Ribera, minister for the ecological transition of Spain, which is hosting United Nations climate talks in December.

A European tax on goods imported from the United States would be certain to exacerbate trade tensions with the Trump administration. But Europe has been threatening such a tax for years and, so far, has not followed through.

Mr. Pompeo, in his remarks on Twitter, said that the United States would still maintain a voice in international discussions on global warming.

“We will continue to work with our global partners to enhance resilience to the impacts of climate change and prepare for and respond to natural disasters,” he said. “Just as we have in the past, the United States will continue to research, innovate, and grow our economy while reducing emissions and extending a helping hand to our friends and partners around the globe,” he said.

While no other nation has followed Mr. Trump’s lead and left the Paris Agreement — indeed, more countries have joined — few are toughening their emissions-reduction targets. Analysts attributed that to the absence of pressure from the United States and they warned that the Trump administration’s antagonism toward climate action could dampen future ambitions.

Efforts to strategize for the possibility of a second Trump administration are occurring at home and abroad. 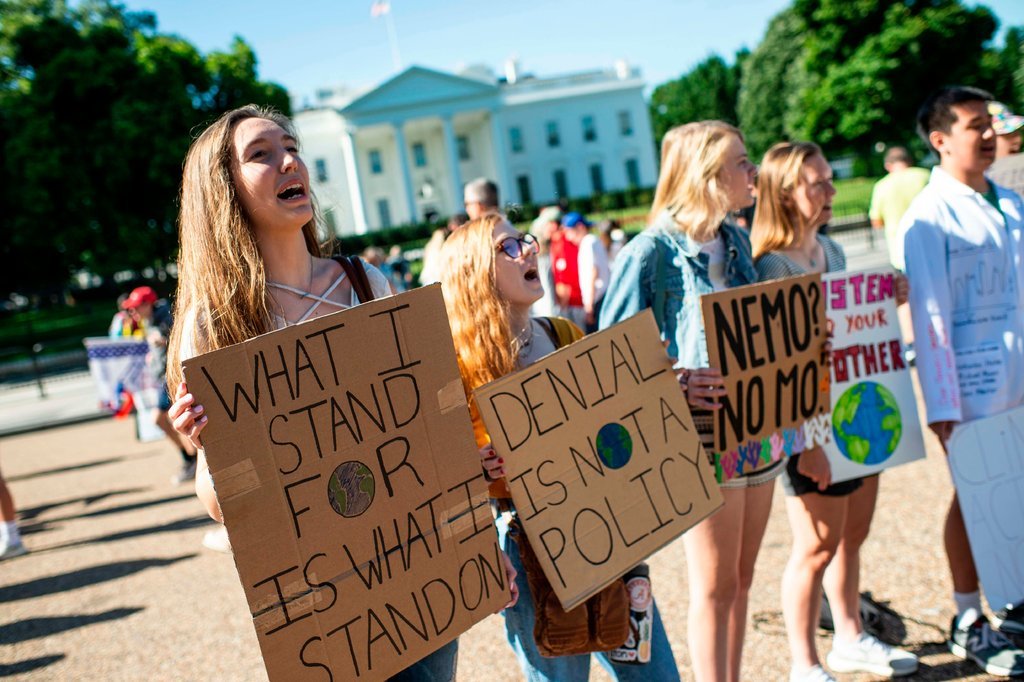 Demonstrators called for action on climate change outside the White House in May. Credit:Eric Baradat/Agence France-Presse/Getty Images

“Because the community was caught flat-footed by 2016, we want to be in a position to be prepared this time,” said Elan Strait, a former climate negotiator in the Obama administration who worked on the Paris Agreement and who now works at the World Wildlife Fund.

In the United States, environmentalists are pressing states, cities and businesses to cut emissions and move to renewable energy sources like solar and wind power. Hundreds of local governments and businesses have made emissions pledges under a movement called We Are Still In, which hopes to show the world that Americans are behind the Paris Agreement even if the administration is not.

Those so-called sub-national government pledges are voluntary, and there is no agreed-upon way to calculate how far their efforts are collectively getting toward President Barack Obama’s pledge to cut emissions about 28 percent from 2005 levels by 2025.

“Cities, states, and businesses haven’t had a formal place at the negotiating table, but the Paris Agreement succeeded in large part because their voices were heard, and they will keep us moving forward until we have a president who will confront the climate crisis and put the public’s health and safety first,” Michael Bloomberg, the billionaire philanthropist and former mayor of New York City, said in a statement.

Mr. Bloomberg has started America’s Pledge, an initiative to track efforts by United States cities, states, and businesses to reduce greenhouse gas emissions. On Monday he also announced that mayors, governors, chief executive officers and environmental leaders would host a “U.S. Climate Action Center” at the next round of climate negotiations to assume the role the American delegation would have played.

Such efforts are expanding internationally. While the Paris Agreement focused on national governments, Ms. Tubiana said the actions of states, provinces, businesses and others were driving some of the most concrete changes. The challenge, she said, would be devising ways to turn all of those pledges into a system that can chip away at global emissions.

“Whatever happens on the United States side, even if a Democratic candidate would be elected, we have to prepare to have a structure,” she said.

The letter to the United Nations on Monday would allow Mr. Trump to officially pull the United States out of the Paris Agreement the day after the presidential election. The United States would still be allowed to attend negotiations and weigh in on proceedings but would be downgraded to observer status.

Jonathan Pershing, who served during the Obama administration as the State Department’s special envoy for climate change, said a Democrat rejoining the Paris Agreement would likely be expected to deliver a specific suite of policies showing how the United States intended to move away from fossil fuels. Even then, he said, other countries would be rightly wary that the pendulum of support for climate action could swing back in another election cycle. The United States will have to live with that lingering mistrust, Mr. Pershing said.

“The United States has been written off in many cases as a partner,” he said. “You just can’t count on them.”

This article originally appeared on New York Times' website and can be viewed here.