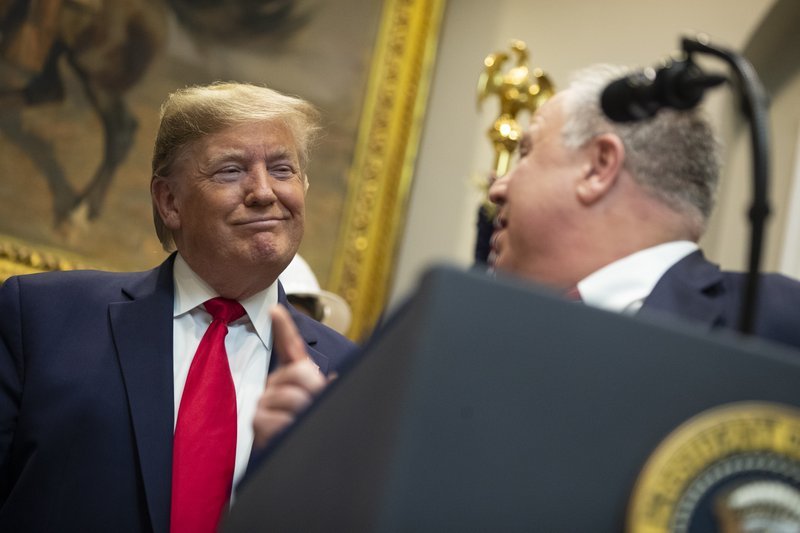 WASHINGTON (AP) — In a dramatic rollback of environmental oversight, President Donald Trump took action Thursday to clear the way and speed up development of a wide range of commercial projects by cutting back federal review of their impact on the environment.

“The United States can’t compete and prosper if a bureaucratic system holds us back from building what we need,” Trump said at the White House in announcing the proposed regulatory rollback, surrounded by Cabinet secretaries, industry leaders and workers in hard hats.

Trump’s proposal calls for greatly narrowing the scope of the half-century-old National Environmental Policy Act, signed by Republican President Richard Nixon in 1970. It was one of the first of that era’s fundamental environmental laws, along with the Clean Air Act and Clean Water Act, that spelled out the country’s principal protections.

That National Environmental Policy Act required federal agencies to consider whether a project would harm the air, land, water or wildlife. It also gave the public, including people living in the neighborhood around a proposed dam, pipeline or other big project, the right of review and input. Congress said at the time that the nation was moving to “fulfill the responsibilities of each generation as trustee of the environment for succeeding generations.″

Trump, who has targeted environmental rules in his drive to ease the way for business, said Thursday that enforcement of the law had slowed federal approval of projects. “America’s most critical infrastructure projects have been tied up and bogged down by an outrageously slow and burdensome federal approval process,″ he said. “The builders are not happy. Nobody’s happy.″

Environmental groups and Democratic lawmakers countered that the proposed rollback would gut major environmental protections and take away the public’s right to know and comment on a project’s potential harms.

Key among the changes proposed is one that would newly limit the requirement for federal environmental review to projects that have major federal funding.

The change would mean a range of predominantly privately funded and managed projects would not fall under the law’s requirement for federal environmental study and for public review and comment.

Other changes including giving federal agencies no more than two years to evaluate any environmental impact of a project.

Mary Neumayr, head of the administration’s Council on Environmental Quality, said the changes would not explicitly bar federal consideration of a project’s impact on the nation’s output of climate-damaging fossil fuel emissions. But environmentalists said a change instructing federal employees to disregard cumulative and longer term effects would have the same effect, however.

The proposal is to be published in the Federal Register in coming days, followed by a 60-day period for public comment.

Although relatively little known outside of industry, government and environmental circles, the act sets out some rights that Americans now take for granted, said Stephen Schima, senior legislative counsel with the environmental advocacy group Earthjustice. “That public meeting you went to in your neighborhood about a highway?″ Schima said. “’That was because of NEPA.”

House Speaker Nancy Pelosi accused the administration of further sidelining any federal efforts to confront climate change. ″These new guidelines undermine critical building requirements that ensure that our communities are able to withstand the growing threat posed by the climate crisis,” she said.

Groups representing professional state and urban planners spoke out against the administration’s proposal.

“Ignoring the future impact of climate change as part of the nation’s core environmental review law will only increase costs of development and future disaster recovery on taxpayers and communities, while making us all more vulnerable to its already apparent effects,″ the American Planning Association and the Association of State Floodplain Managers said in a statement.

Trump said the changes would deliver “gleaming new infrastructure” to the United States and would “completely overhaul the dysfunctional bureaucratic system that has created these massive obstructions.

Trump has called throughout his presidency for oil and gas pipelines, in particular, to move ahead despite local opposition. He has advocated shortening the time and length of environmental reviews for projects.

Industry, including the oil and gas sector, has pushed the administration to make good on its pledges for changes in how the federal government enforces the NEPA when it comes to approving or disapproving projects.

Anne Bradbury, head of an independent oil and gas producers trade group, said the new changes will speed up permitting of oil projects, including pipelines, on federal lands.

Jay Timmons, president of the National Association of Manufacturers, in a statement thanked the administration ‘’for listening to manufacturers—and working to ensure that the 21st-century highways, bridges, power lines, cell towers and more that we rely on get built. ‘’

This article originally appeared on the Associated Press' website and can be viewed here.