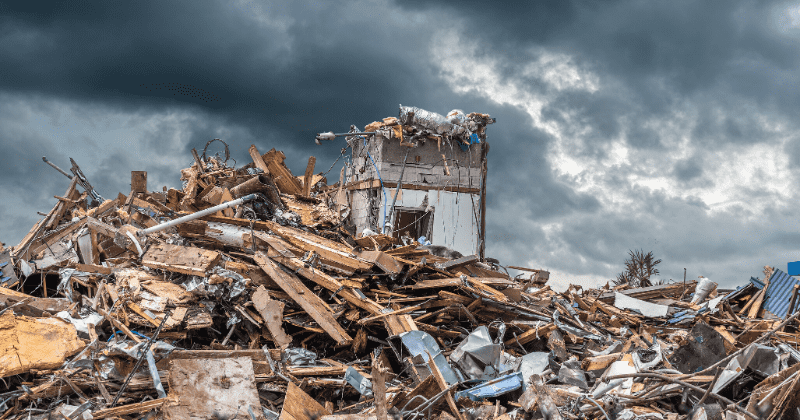 Flood damages in the US are mainly being driven atmospheric rivers or rivers in the sky -- columns of water vapor that cause very heavy rainfall or snow -- and they are set to worsen, posing a $1 billion-a-year flood risk in western US.

Flooding has caused $50.8 billion in damages to western states in the last 40 years, from 1978 to 2017, and over 84% of these damages were caused by atmospheric rivers, according to an analysis by researchers at Scripps Institution of Oceanography at the University of California San Diego and the US Army Corps of Engineers.

The team analyzed the economic impact of the winter storms that deliver an increasingly large share of rain and snow to California and the west.

According to the research team, in the coastal states of California, Oregon, and Washington, atmospheric rivers were responsible for over 99% of all flood damages in some areas.

"Across the 11 western conterminous states, from 1978 to 2017, we find that total estimated flood damages, during all seasons, amounted to $50.8 billion. And atmospheric rivers accounted for 84% of these damages, that is, $42.6 billion, or roughly $1.1 billion a year," says the study published in Science Advances. 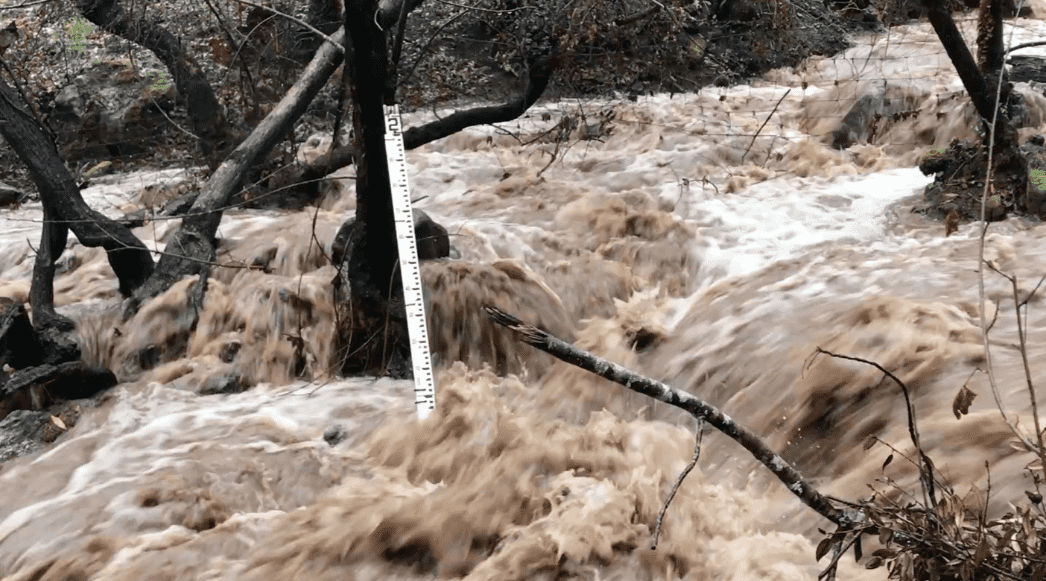 Large flows in a tributary to Lake Mendocino in Mendocino County, California (February 16, 2019) during the first winter after the July 2018 fires. The flows subsequently strengthened to flip the boulder to which the staff gauge was attached. (Center for Western Weather and Water Extremes (CW3E) at the University of California San Diego or UCSD)

What's more, each increase in atmospheric river intensity (ranked from Category 1 to 5) corresponded to a roughly tenfold increase in damages. For example, says the team, Category 1 and 2 storms caused under one million dollars of damages, whereas Category 4 and 5 storms cost tens and hundreds of millions of dollars in damages, respectively. Rising population and increased development are likely to drive potential costs even higher, say researchers.

The experts also found that much of the economic damage was caused by only a handful of these storms. An estimated $23 billion in damage, nearly half of all flood damage in the West over 40 years, was caused by just 10 atmospheric rivers.

Overall the total flood damage from them averaged $1.1 billion annually throughout the west.

The analysis shows only 13 events, spanning 65 days, caused over $1 billion in estimated total damages. These events accounted for 58.3% of total insured losses. These "highly damaging" atmospheric rivers were multi-day events, varying in length from 3 to 11 days, with peak damages generally occurring one day after initial landfall.

"A small number of extreme atmospheric rivers cause most of the flood damages in the West, and even modest increases in intensity could significantly increase their impacts," says postdoctoral researcher Tom Corringham, who led the team.

According to Corringham, the findings contribute to evidence suggesting that changes in flood mitigation policy and disaster response are necessary.
"This is a reminder that weather and climate matter. Every step we take now to stabilize the global climate system stands to reduce future adverse impacts on our economy," he says.

What are atmospheric rivers

The research team, which conducted the current study, says that atmospheric rivers are long narrow corridors of water vapor in the atmosphere capable of carrying more than twice the volume of the Amazon River through the sky.

Satellite and aircraft observations have confirmed atmospheric rivers cause significant floods in the US, especially the western region due to the air mass lifting over mountainous regions, say experts.

The National Oceanic and Atmospheric Administration (NOAA) describes atmospheric rivers as relatively long, narrow regions in the atmosphere – like rivers in the sky – that transport most of the water vapor outside of the tropics. 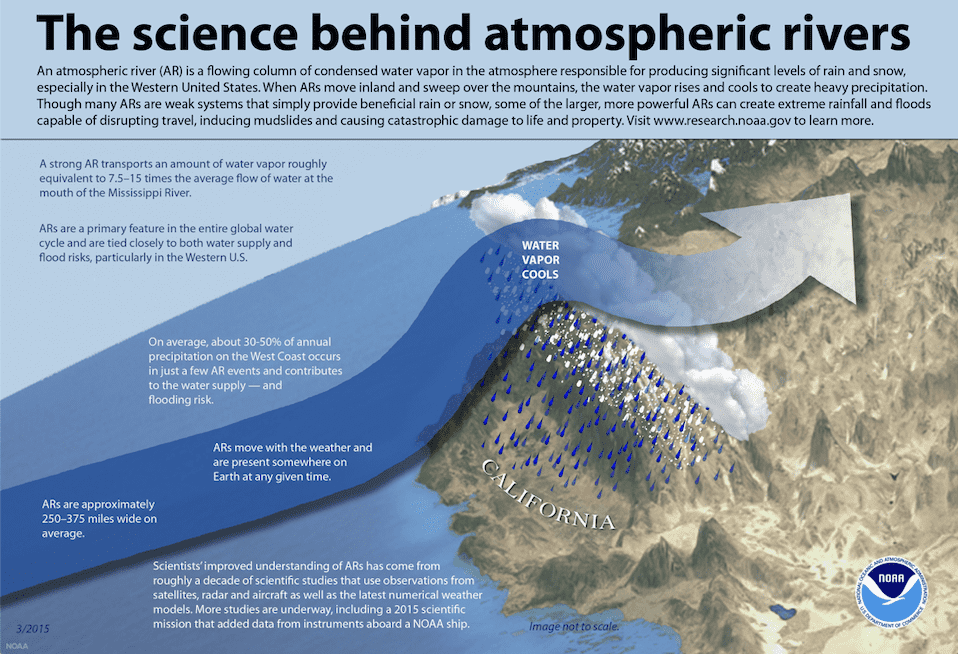 The science behind atmospheric rivers. (Infographic courtesy of NOAA)

"These columns of vapor move with the weather, carrying an amount of water vapor roughly equivalent to the average flow of water at the mouth of the Mississippi River. When the atmospheric rivers make landfall, they often release this water vapor in the form of rain or snow," say NOAA experts.

Atmospheric rivers come in many shapes and sizes, but those that contain the largest amounts of water vapor and the strongest winds can create extreme rainfall and floods, say experts, often by stalling over watersheds vulnerable to flooding. "These events can disrupt travel, induce mudslides, and cause catastrophic damage to life and property," says NOAA.

In recent research, atmospheric rivers have been shown to be significant drivers of weather and hydrology in the western US, often making the difference between drought and flood years over the span of just a few intense storms.

The researchers used 40 years of flood insurance loss data from the National Flood Insurance Program (NFIP), measures of total damages from a National Weather Service dataset, and a complete catalog of West Coast atmospheric rivers for their analysis.

They found that in a warmer climate, the atmospheric rivers will become even more significant as global warming trends increase their intensity.

The analysis shows that these extratropical storms will become wetter, longer, and wider – which is expected to exacerbate atmospheric river-driven financial cost. There is some indication this is already happening in relation to Pacific Ocean warming. 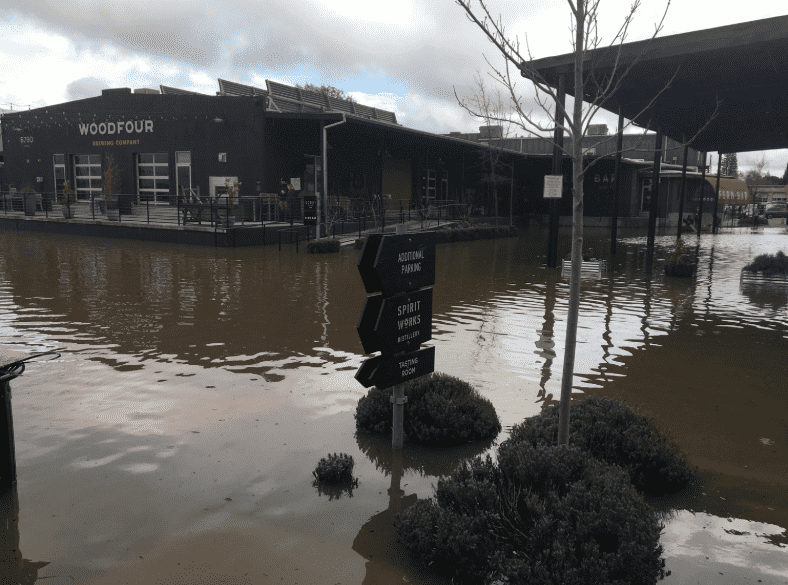 Flooding around the town of Sebastopol, California (February 27, 2019) during a radiosonde campaign out of the Bodega Marine Laboratory. (Photo by Nina Oakley)

Accordingly, scientists and emergency officials have called for more research to improve the ability to forecast the paths of atmospheric rivers as they reach land and their potential to deliver rain and snow.

"To help focus future research and forecasting improvements, we recommend that the NOAA begin tracking damages by atmospheric rivers, as they have long done for hurricanes and tornadoes," says the study.

Talbot says: "Additionally, improved understanding of the potential economic damage from atmospheric river storms will greatly enhance the flood risk management mission of the Corps of Engineers and their state and local partner agencies."

This article originally appeared on MEAWW's website and can be viewed here.