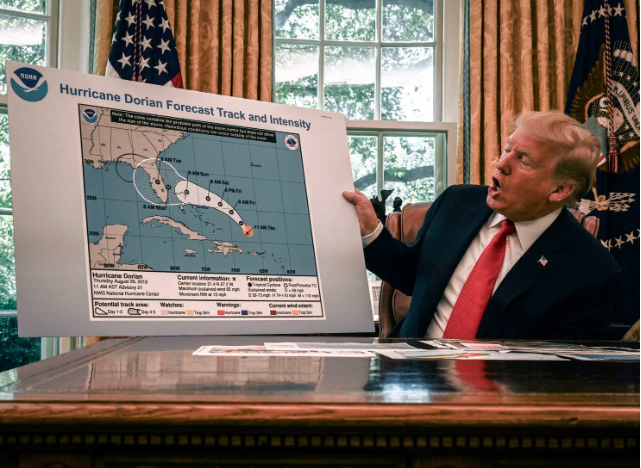 Weather forecasting should never be political. The National Weather Service, an agency within NOAA, issues forecasts and warnings that are based on science and focused squarely on public safety. For more than a century, the agency has played a vital role in protecting the lives and property of Americans across the country.

To be effective, NWS forecasts and warnings need to be accurate, timely and clear. Everyone — citizens, airline officials, farmers, fishermen, city officials and emergency managers — relies on the NWS to provide trustworthy information. Even a hint that a forecast or warning was influenced by politics would undermine the public’s trust and the ability to respond quickly and effectively under potentially life-threatening conditions.

If political appointees overrule trained scientists, imposing political concerns on scientific matters, they endanger public safety as well as the credibility and morale of the agency charged with protecting that safety.

That is apparently what happened last week. As the potentially dangerous weather conditions caused by Hurricane Dorian rapidly evolved, NOAA officials in Washington overrode sound science and undercut NWS professionals, apparently to provide cover for the president, who on Sept. 1 had posted inaccurate information on Twitter. Worse, NOAA officials, in an unsigned statement, had the gall on Sept. 6 to chastise NWS forecasters in Birmingham, Ala., for telling the public — correctly — that Alabama was not actually endangered.

The impetus for the reprimand might have come from high in the Trump administration: The New York Times on Monday reported that Commerce Secretary Wilbur Ross, who heads the department responsible for NOAA, threatened to fire agency officials after the Birmingham office contradicted the president.

It was bad enough that Trump’s warning to Alabamians of a serious risk from Hurricane Dorian was woefully outdated. But it would be appalling if NOAA political appointees sought to defend his mistake, while castigating the NWS office for accurately reassuring Alabamians that they were not in danger.

NOAA has a scientific integrity policy for a reason — to prevent politics from interfering with the discovery, use and communication of scientific information, and to deal with violations of its standards. Moreover, manipulating weather information can be a federal offense. To restore public trust in weather forecasts and warnings, every step should be taken to learn from this distortion of truth and breach of trust.

NOAA has been without a permanent leader since the beginning of the Trump administration, instead relying on acting heads to run the agency. The lack of genuine political leadership is all too apparent. The Senate should press the White House to nominate a qualified candidate who can restore public confidence in the non-political nature of this vital agency. McLean’s investigation is a good first step in finding out more about the breach of public trust, but scrutiny by Congress and the inspector general may also be merited. It is essential that the federal government does all in its power to reaffirm, and to safeguard, NOAA’s scientific integrity policy.