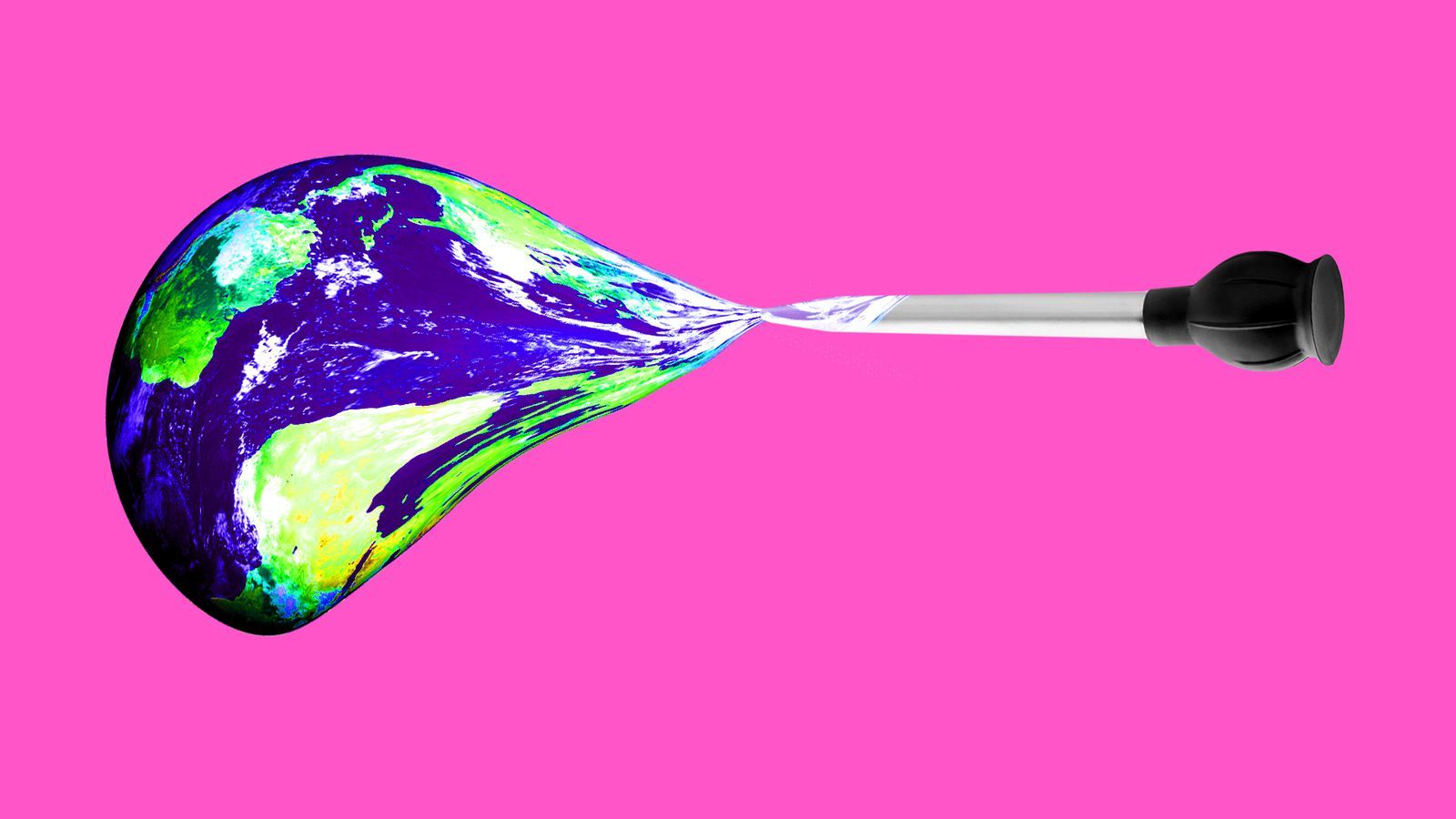 Nascent tech that pulls CO2 from the atmosphere could "significantly" reduce the costs of fighting climate change, but achieving scale is hardly a sure thing and massive deployment would consume lotsof energy, a new peer-reviewed study warns.

Why it matters: The paper in Nature Communications arrives amid increasing attention to direct air capture (DAC) and other negative emissions technologies.

What they found: According to the study, widespread deployment down the road would create a longer cushion to achieve steep emissions cuts.

Threat level: If policymakers wrongly bet on large-scale deployment, it could lead to a global temperature "overshoot" of up to 0.8 °C. That's a lot, given that Paris aims to limit the total increase to 1.5°C–2°C above preindustrial levels.

The bottom line: The paper warns that DAC should not be viewed as a crutch, but rather as complementary to emissions-cutting strategies.

Go deeper: Direct CO2 capture machines could use ‘a quarter of global energy’ in 2100 (Carbon Brief) 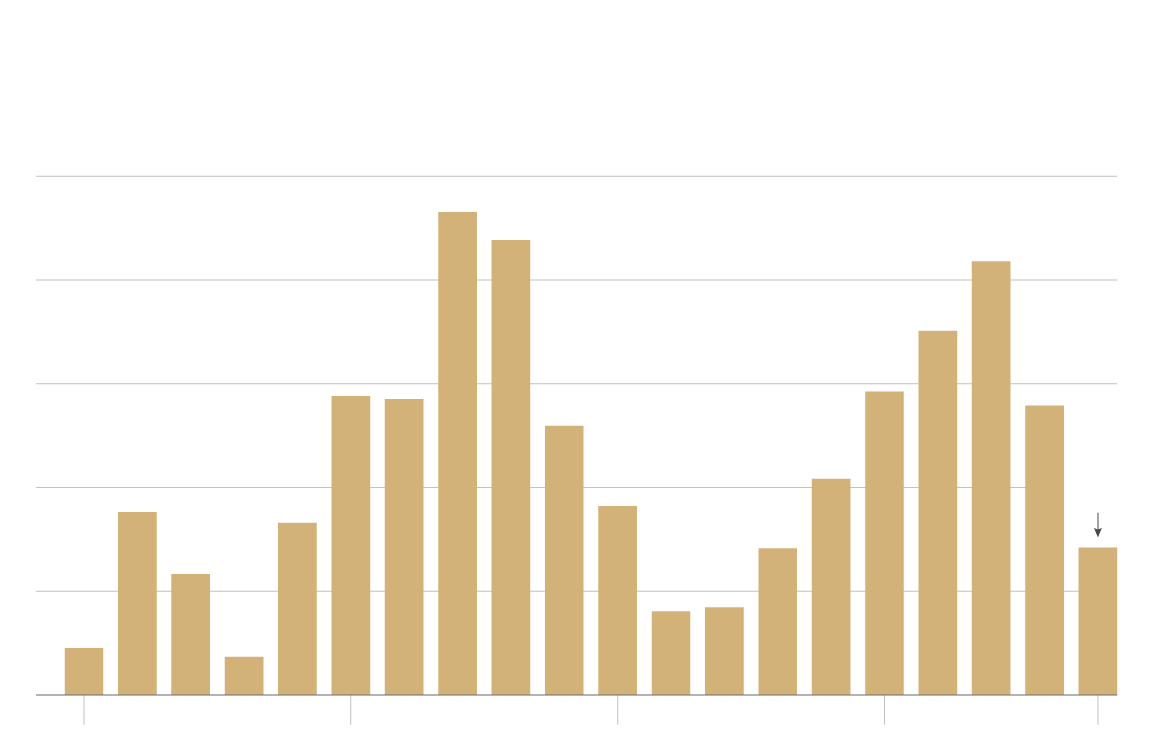 Environmental opposition to natural gas pipelines has grown significantly over the last decade, but the impact on actual federal approvals of such projects is limited, Axios' Amy Harder reports.

Driving the news: Check out the chart above, which shows annual approvals via the Federal Energy Regulatory Commission of natural gas pipeline capacity over the past couple of decades. These approvals ebb and flow with fuel prices and other cyclical parts of the energy business.

One level deeper: The drop in pipeline approvals around 2011 is likely due most to declining investment after the financial crisis, says Jacques Rousseau, a managing director of the nonpartisan research firm ClearView Energy Partners.

"We believe that oil prices have become a broken barometer for gauging the rising pressure in the region and are now much more of a lagging risk indicator."

Who said it: Helima Croft, a top analyst with RBC Capital Markets, writes the above in a note on geopolitical tensions with Iran, which seized a British-flagged vessel Friday. But, the move only had a modest upward effect on crude prices.

Why it matters: Oil markets are largely shrugging off the escalation of tensions around the Strait of Hormuz, a topic we explored a bit in yesterday's newsletter.

Threat level: The RBC note argues the slight uptick does "not reflect the severity the escalating crisis" in the region and that traders are more focused on bearish signals around trade wars and oil demand.

4. By the numbers: Q2 lobbying

Why it matters: They're a look at how much money is sloshing around the Beltway-influence competition. Click on the links to see what topics they're lobbying on.

Here are a few snapshots...

5. Enviro groups offer rules of the sea for offshore wind

Several environmental groups are jointly making the case for how to harness large offshore wind resources while avoiding harm to marine life.

Why it matters: The guidelines floated Tuesday by the Natural Resources Defense Council, Audubon, Defenders of Wildlife and other groups arrive as deep-pocketed developers plan large Atlantic Coast projects.

What they're saying: The groups offer guidelines around siting, construction and monitoring, such as...

United Nations: "UN chief António Guterres wrote to every head of state over the weekend, demanding they set out plans to achieve carbon neutrality by 2050," Climate Home News reports.

Sanctions: "The U.S. is imposing new sanctions against a Chinese company for transporting Iranian crude, a move that widens the U.S. campaign of pressure on the Islamic Republic amid weeks of escalating tensions," the Wall Street Journal writes.

Mining: "BHP, the world’s largest mining group, will set public goals next year on reducing greenhouse gas emissions from its products even after they have been sold, as it looks to take an industry lead on tackling climate change," via the Financial Times.

EPA: The Washington Post reports that the EPA's internal watchdog is probing Bill Wehrum, who recently left his role as the agency's top air quality official after serving since late 2017.

This article originally appeared on the Axios website and can be viewed here.